Back to Science Blog
This page is optimized for mobile devices, i.e. graphics are shown as static images.

About the Effectiveness and Benefits of the Corona-Warn-App

As words can be interpreted differently depending on the context in which they are used, productive scientific debates rely on basic shared definitions of relevant terminology. The following definitions are intended as a foundation for discussion.

Effect
Effect is a theoretical quality criterion that can be used to ascertain whether a particular function is having an intended impact. However, when studying the effect, unintended impacts that result from the use of the app also need to be taken into account. As the CWA is aimed at breaking infection chains, its effect can be measured by studying whether its users infect fewer people than those who do not use the app.

Usefulness
Usefulness generally refers to the benefits that a person derives from using something. The usefulness of the CWA consists of its ability to prevent new infections and to reduce the spread of coronavirus.

Aims
An aim can be defined as the motivation behind a purposeful activity or form of behaviour. Whereas the impact (effect) and the achievement of an aim (usefulness) represent the actual goals behind the app, sub-goals are also relevant in this context, because their combined functionality improves effectiveness, provides benefits and can also be measured.

The functions of the CWA system and the interaction between its component parts, which run together very smoothly, play a major role in the effect that it has. Non-functional properties, such as the app’s usability, but also organisational aspects, such as interaction between the actors involved, are also decisive for the app’s usefulness. And importantly, users being able to trust that their data will be processed appropriately, with the necessary data protection and transparency measures in place, are crucial aspects with which to encourage people to actively use the app.

What are the aims of the CWA?

The Data Protection Impact Assessment (DPIA) stipulates that the CWA should undergo an evaluation to assess whether it fulfils its aims and whether the personal (albeit pseudonymised) data on which it relies are processed appropriately. In this regard, the CWA has three aims:

Aim 1 – Provide test results
People who have been tested for SARS-CoV-2 should receive their test results as soon as possible.

Aim 2 – Warn other users
People who have received a positive test result should be able to inform or warn other people who have been in their immediate vicinity of their increased risk of infection.

Aim 3 – Determine risks
People who have been in the immediate vicinity of a person with SARS-CoV-2 should be informed or warned of their increased risk of infection.

These three aims should not be considered separately, as they are interconnected and depend on each other for their effect. A person who has been in the immediate vicinity of someone with SARS-CoV-2 can only be informed or warned that they face an increased risk of infection (purpose 3) if the person who received the positive test result can inform or warn them, and actually does so (purpose 2). Moreover, if this is to happen quickly enough to break the infection chain, the person who tested positive for SARS-CoV-2 must receive their results as soon as possible (purpose 1).

The CWA can be assumed to be contributing towards combating the pandemic if it fulfils these three aims.

Does the CWA fulfil its aims?

The following graphs demonstrate not only that the CWA does indeed fulfil its aims, but also the extent to which it does so.

Fig. 1: Tests registered with the CWA and their results. 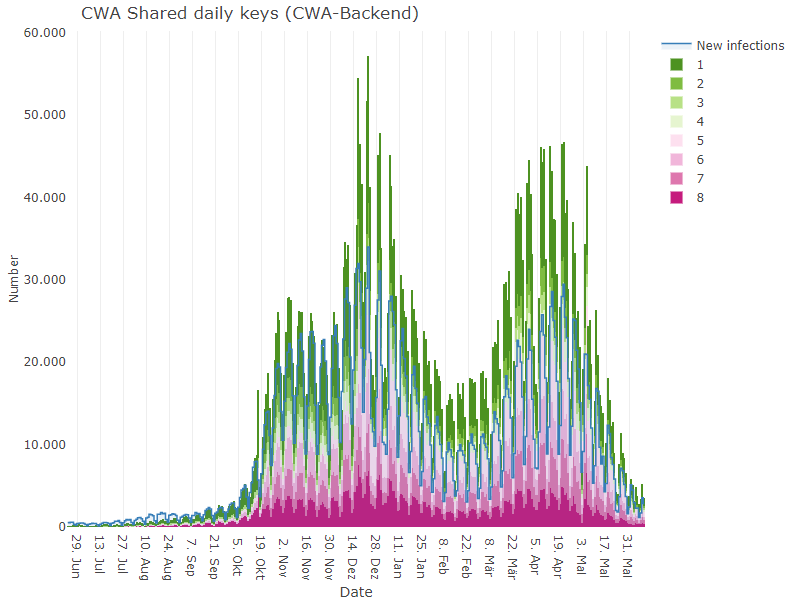 Fig. 3: The number and risk level (Transmission Risk Level, TRL) of the daily keys shared via the CWA.

Fig. 4: Users who provided or received warnings via the CWA.

Figure 4 shows the numbers of warnings provided and received via the CWA. Whereas the number of people who provided a warning is known, only data donated by users can be used to estimate the number of people who received a warning. These data suggest that the app generated 314,736 red warnings and 574,163 green warnings. Nevertheless, the actual number (during the specified period) is assumed to be around two to three times higher. During this period, 205,066 people provided warnings via the CWA, which means that each person who did so warned around five other individuals who then also received a red warning.

What is the purpose of evaluating the CWA and what aspects play a role in the evaluation?

The evaluation is aimed at examining the effectiveness and benefits of the CWA.

Evidence of the app’s effectiveness – that its users infect fewer people than those who do not use the app – are based on the following two points:

In order to investigate the first point, an analysis needs to be conducted of the steps that are taken from testing through to a user receiving a warning, in addition to data that would show the length of delay between these steps and throughput rates.

Digitisation enables essential processes to be accelerated and made scalable. The analysis can therefore also provide estimates of effect.

It is difficult to provide figures for the second point due to the way that the app minimises data collection. As such, direct and indirect evidence from user surveys need to be used instead.

When attempting to measure effectiveness, therefore, it is important to answer the following questions:

When it comes to usefulness, further questions about the actual way in which the app is used also play a role:

Sometimes it is only possible to answer these questions (and account for the two points described above) by developing realistic models and simulations. The resulting figures can be used to make claims about how many cases of infection and the numbers of deaths that are being prevented by the CWA.

Finally, it is important to note that the basic functionality and reliability of the Bluetooth Low Energy (BLE) distance measurements were studied and verified in laboratory experiments by Fraunhofer IIS. We also intend to provide more information about the results of these tests.

BLE measurements by Fraunhofer IIS to calibrate the parameters

Which figures are taken into account in the evaluation and where do the data come from?

The app is to be evaluated in order to assess the contribution it makes to breaking chains of infection. The CWA uses a data-saving approach, which means that only a limited amount of data is available for the evaluation. Therefore, on the one hand, the evaluation relies on the voluntary participation of the app’s users who provide data for research into its effectiveness. Two methods were developed to collect these data: an event-driven user survey event-driven user survey and voluntarily donation of usage data (Privacy Preserving Analytics, PPA). On the other hand, the evaluation also relies on data from central and decentralised components of the CWA’s infrastructure as well as external sources.

An evaluation of whether the app fulfils its aims and is effective, as well as its acceptance and usage, involves the collection and analysis of the following data (cumulative and over time):

An online survey was undertaken among users who received a notification between the beginning of March and the beginning of May 2021 indicating that they were at ‘increased risk’. The users were asked about their behaviour before they had received the risk notification and about their planned behaviour afterwards. The second part of the survey was carried out five days later and aimed to determine whether these users had actually implemented their planned behaviour. One of the goals of the survey, therefore, was to find out whether the risk notification provided by the CWA actually led users to change their behaviour.

The evaluation also involves an event-independent analysis of technical usage data on the function and usage of the CWA. These data are collected from app users via voluntary data donation.

Privacy Preserving Analytics (PPA) – the analysis of usage data while preserving privacy –helps provide a better understanding of how the CWA is used and enables its functions and user-friendliness to be continuously improved. Relevant data have been collected since the beginning of March 2021.

The data donated by users can be used to examine:

Key data from the CWA’s back end

Data on test registration and the sharing and retrieval of daily keys are central to assessing the effectiveness and benefits of the CWA. These data are provided directly from the CWA’s back end.

The RKI has access to other key data sets which are gained from additional sources. These can provide indirect evidence of the benefits of the CWA. They include data from the Apple App Store and Google Play Store. In addition, external (interview-based) studies with different study periods and focuses are also to be used. Although external studies apply different methodological approaches and focus on different issues, the combination of their findings provides important information about aspects of user acceptance and has implications for behavioural changes relating to the CWA.

In addition, conclusions about the current number of cases and the overall numbers of tests that have been carried out are also needed. Some questions, especially those relating to hypothetical scenarios (‘What if ...?’), can only be answered using heuristics, models and simulations.

What are the benefits of the Corona-Warn-App?

The data sources currently available enable initial conclusions to be made about the effectiveness and benefits of the CWA. A detailed analysis of relevant data will be carried out regularly in greater detail over the coming weeks.

These preliminary figures show that the CWA is effective and useful and that it continues to make an important contribution to breaking chains of infection. Moreover, the benefits associated with the CWA increase with each additional user that installs the app.

Comparison of people warned by the CWA and newly infected people (data on warnings from data donation; only users with information about their local district)

More topics in the next few weeks

Over the coming weeks, the Robert Koch Institute will be using this blog to provide detailed information about various aspects of the CWA evaluation. The results will also be assessed in relation to those gained from analyses of other national contact tracing apps.

Back to Science Blog